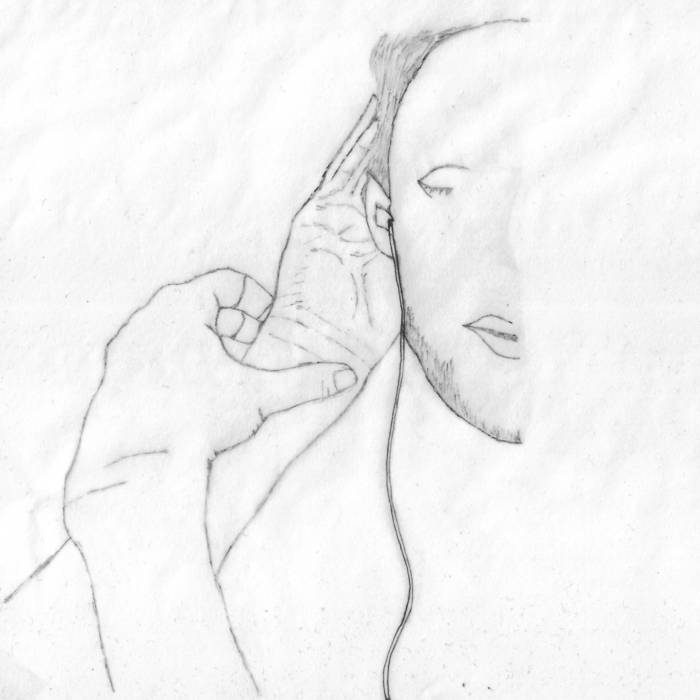 1. Pointers – an introduction
This is one of four tracks for this album.

This track details how the artist intends one to engage with Cues.

Track 2 walks through the process of setting the volume on a playback device.

Track 3 is a practice room.

Track 4 is the title track.


SECTION 1: CONTEXT
Cues is intended to be listened to by an individual audience member during and alongside the course of a concert-length music event.

Cues is rendered in mono; an audience member should select one earbud to wear during the event, leaving the other ear open and the other earbud in a quiet location.

Over the span of 90 minutes, an audience member will hear several different sounds and instructions, amidst large intervals of silence.


SECTION 2: MODES
Both modes are indicated verbally via speech with the words “listen” and “imitate”.

Mode 1: “listen”
Listen to the sounds without purposefully reacting physically.


SECTION 3: SOUND AND ACTIONS
Category A: Silent Actions
1. Close eyes: Close both eyes upon the following high frequency sounds: _Audio Example 1_
⁃ Open eyes once high frequency sounds have finished.
2. Cover ear: Alongside this pink noise sound, gradually cover and uncover the ear holding the earbud: _Audio Example 2_ (see album cover for visual reference).
3. Tap back of hand and wrist: With the hand opposite the ear holding the earbud, gently tap the backside of the other hand and wrist with the index and middle fingers.
⁃ The pressure of tapping should loosely relate to the volume of the tapping sound: For Example _Audio example 3_
⁃ The two tapping fingers will move up, down, left, or right depending on whichever whispered utterance of direction precedes the tapping sounds. For example: _Audio Example 4_
⁃ The tapping fingers should resume movement from where they last ended, remaining stationary during silences.
⁃ The thumb of the tapping hand should rest on the wrist of the other hand underneath the thumb. It should be possible to feel the heart pulsing in this position. (See album cover for visual reference for this position).

Category B: Sounding Actions
1. Click tongue: quietly click the tongue against the roof of the mouth alongside these sounds: _Audio Example 5_
2. Breathe: imitate breath sounds; _Audio Example 6_
⁃ breath sounds always proceed tongue clicking sounds
⁃ breathe through either the mouth or nose; it does not matter.

Category C: Other Sounds
1. There are two other sounds that occur during Cues. They both occur in the “listen” mode.

N.B.
1. The above actions can be and are overlaid at points in Cues. At no point are the physical actions overlaid in a combination that is physically impossible.
2. Sounding actions should be as discreet and non-obtrusive to others as possible
3. Remember, do not purposefully react physically in the “listen” mode.
4. Because there are finger movements along the hand and wrist, it is recommended that any jewelry, wristbands, or watches be removed before playback of Cues.


SECTION 4: PREPARING PLAYBACK
An audience member should download tracks 2 and 4 and place them into an individual playlist on their playback device of choice.

Where possible, in the performance space for the music event, listen and follow the instruction on track 2 to set the playback volume for Cues.

Once the volume level is set, wait until about 2-3 minutes before the start of the music event, the program of performances, and then begin playback of Cues.


SECTION 5: PLAYING CUES
Upon playback of Cues, an audience member should hear a short test tone to indicate that the track is playing. The subsequent 10 minutes are silent.

There are several large intervals of silence during Cues, which may lead an audience member to think that the audio recording has either finished or has paused. Do not worry whether the recording is playing or not during the event. Similarly, do not worry whether or not the recording has finished. If there is an interval or intermission during the music event, it is suggested that an audience member might check their playback device then.

An audience member may chose to pause Cues during the interval or intermission, though they may also chose to continue to listen to and perform Cues during those periods.

Cues can be listened to by one or more audience members at the same time, in or out of synchronization with one another.

If asked what an audience member is listening to, the following answer is suggested: “I am [or We are] listening to Cues by Michael Baldwin, 2017.”

While it is intended that Cues be engaged with during a music event, it may similarly be listened to in the way described here, or in any other way that a listener sees fit for purpose, in any other environment.


2. Signal – a sound check
This track walks through the process of setting the volume on a playback device.

Set the volume on the playback device so that the following sound is only audible to you and does not bleed outside of the earbud: _Audio Example 7_


3. Key – a practice room
This is a practice track for associating sounds with physical actions.

A verbal description of the physical action to be performed is followed by the sound associated with that action and a short silence.


4. Cues
Two questions to the artist:

Q: Have you tried doing this yourself?
A: This was made in my room over the span of 72 hours for the Weekend EP Project (for which I have pursued a decidedly non-traditional definition of EP!). Other than testing movements and excerpts of the recording during the creation process, no, I have not tried this out in the wild. For any of the curious among you who do try this, please send reflections, feedback, etc. to michaelbaldwin21@gmail.com or comment here on Bandcamp.

Q: Why have you made this?
A: I made a pair of pieces in 2016 called Affective … hopes of being moved to feel … Ripples that explored what would happen if a group of ten performers wore earbuds that played back different sounds related to four basic emotions: happiness, sadness, fear, and disgust. One of the performers made the observation after the concert that they were more able to give way to their emotions and split their attention in relation to the audio recording when they were an audience member rather than a performer. Since then, I’ve variously contemplated the idea of making something that audience members could listen to during a music event that would subtly unsettle any audience/performer divide, sanctities of “musical work”, and enhance the sense of hearing and act of listening. This is my first attempt at such an aim.
The work is also inspired by a range of other influences:
⁃ something called a Re-Vibe, which is a wristband that vibrates every 5, 7, or 10 minutes as a way of refocusing attention;
⁃ an almost entirely misunderstood conversation I had with Lucy Railton about the idea of audiences and performers existing “in communion”;
⁃ Louis d’Heudieres’ Laughter Studies series; the two modes in Cue, “listen” and “imitate”, are derived from Louis’ “describe” and “imitate” modes;
⁃ and Marc Codina’s Audience Relief series, which playfully engages audience members as listening-performers.

The Weekend EP Project gives artists 72 hours to complete an EP. Its an excuse to solidify work that you've been tinkering with, or a way to try to extend your artistic tendrils or a way to be another person for a weekend or just a deadline (which we all desperately need) ! A new Weekend EP will be released each month by new artists - so check back in! ... more

Bandcamp Daily  your guide to the world of Bandcamp